After the downfall of the 3:rd reich, on the 5:th of May 1945 a strange battle took place in the Tyrolean mountains in Itter, Austria.
Soldiers of the Wehrmacht and the US Army joined forces fought together against the SS to save the lives of prisoners being held in the castle of Itter.
Under the command of American Captain John C Lee and German Major Josef Gangl the castle was defended by less than 30 German and American soldiers together with the French former prisoners of the castle.
Together, and with a little help from their Sherman Tank ”Besotten Jenny” who was placed at the main entrance they managed to hold the 100-150 men strong Waffen SS unit at bay until they were relieved by the allies.

Jenny at the gates, as the SS open fire
There´s no time to waste, the final battle has begun

After the downfall, a castle besieged
Facing the nazis awaiting relief
Gangl and Lee and their men set the prisoners free

One last fight, it’s the death throes of the 3:rd reich
Justice shall be done, the final battle remains

Ammo is running low, they’re depleting their machineguns
Every bullet counts until surrender is announced

After the downfall, a castle relieved
Defeating the nazis who held them besieged
Gangl and Lee and their men set the prisoners free

Sabaton is a registered and protected trademark. 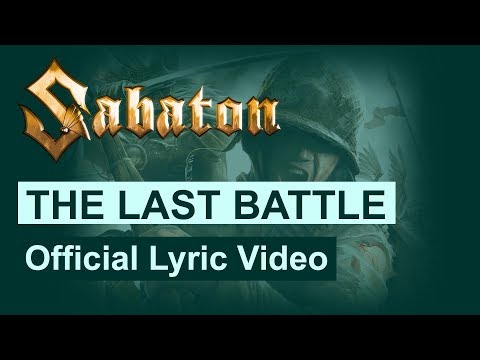 The official lyric video for Sabaton's "The Last Battle", from the album "The Last Stand". ➞ SUBSCRIBE for more Sabaton: http://sm...