Listen to the The Great War album: https://music.sabaton.net/TheGreatWar

Thomas Edward Lawrence was sent to Arabia in 1916 as a British liaison to the Arab forces rebelling against the Ottoman Empire with the promise of an independent Arab nation after the war was won. He became known as Lawrence of Arabia.

In his autobiography “The Seven Pillars of Wisdom” Lawrence detailed his participation in the Arab Revolt including The Battle of Tafilah, The Siege of Medina, The Capture of Damascus, and frequent raids against Ottoman controlled Hejaz railway during World War I among many other battles.

While Lawrence was fighting the Ottoman’s in the Middle East, Britain and France forged the Sykes–Picot Agreement, a secret treaty to divide the Arabic territory among each other instead of relinquishing it to their Arabic allies as initially promised. It is not known when Lawrence became aware of the agreement but he did not agree with the deception and attempted to convince his superiors that an independent Arab nation was in their best interest however he was met with little success.

Lawrence left Arabia immediately following the end of the War, returned to the United Kingdom, and continued to serve in various government and military positions. He was fatally injured in a motorcycle accident in 1935 at the age of 46.

Far from home, a man with a mission
In the heat of the glistening sun
In the heart of ancient tradition
This man’s journey has only begun

Lead the charge, a raider has entered the battlefield
Sabotage, the game is about to unfold

As the darkness falls and Arabia calls
One man spreads his wings, as the battle begins
May the land lay claim on to Lawrence name
Seven pillars of wisdom lights the flame

A revolt to gain independence
Hide and seek, hunters hot on their trail
Joined their ranks, obtained their acceptance
Side by side raid the Ottoman rail

After the war has been won, deception or treason?
Who can tell?
Who stood to gain?
Who stood to loose?
Who did the dying?
Betrayal of trust from within or compelled?
The pillars of wisdom can tell
Back home where a new life awaits, whispers of past
The sands of Arabia calling 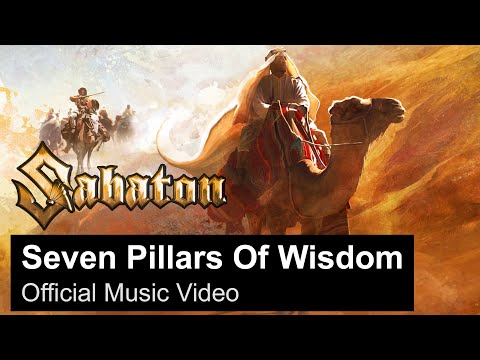 The Official Music Video for Seven Pillars Of Wisdom by Sabaton from the album The Great War. ➞ SUBSCRIBE for more Sabaton: http://smarturl.it/Sabaton...