Listen to the The Great War album: https://music.sabaton.net/TheGreatWar

The Great War, now known as The First World War or World War I, which began in July 1914 and ended in November 1918, was the first truly global conflict the world had yet witnessed. Battles raged across multiple continents and oceans from Europe, Africa, and Asia to the Indian Ocean, and North and South Atlantic Oceans.

With stories of adventure, honor, and untold glory, millions of young men went to fight in the war to end all wars only to meet the grim reality that war is hell. Millions perished, brothers died one-by-one, and family lineages were extinguished.

Territory was lost, and gained, and lost again. The Great War caused the downfall of four major empires and resulted in the creation of the League of Nations, (later replaced by the United Nations) the first worldwide intergovernmental organization whose principal mission was to maintain world peace.

Where dead men lies I’m paralyzed, my brothers’ eyes are gone
And he shall be buried here, nameless marks his grave
Mother home, get a telegram and shed a tear of grief
Mud and blood, in foreign land, trying to understand

Where is this greatness I’ve been told?
This is the lies that we been sold
Is this a worthy sacrifice?

I’m standing here, I’m full of fear, with bodies at my feet
Over there in the other trench, bullets wear my name
Lead ahead, as the captain said and show them no remorse
Who am I to understand what have I become?

I do my duties, pay the price
I’ll do the worthy sacrifice
I know my deeds are not in vain

And feet by feet
We pay the price of a mile here
Though men are falling, we see Heroes rise
We face the heat
As we are fighting until the dawn
So follow me and we will write our own history 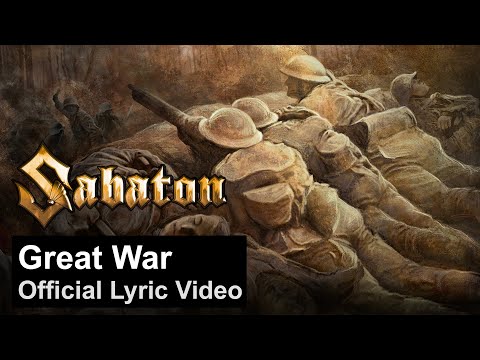 The Official Lyric Video for Great War by Sabaton from the album The Great War. ➞ SUBSCRIBE for more Sabaton: http://smarturl.it/SabatonYouTube ➞ MERC...